Home Remedies
Getting Rid of Moles in Your Backyard

These small velvet furred black hunters exist in dark tunnels underground, and are most active at dawn and dusk, preferring spring and fall weather when the earth is moist enough to dig through. With a diet consisting of insects and earthworms, their passageways, however, allow access for rodents, such as mice, to tuck into your prize crop of carrots, or the tasty roots of brassicas.

Leading solitary lives, most gardens will only be home to one or two moles, but you’ll know if you have a mole as they leave unsightly molehills, consisting of excavated soil, everywhere. However, their presence can actually be beneficial for the soil as the mole’s burrowing aerates the earth, and although they will chow down on earthworms, they also devour harmful pests.

Luckily, moles have an acute sense of smell, so we can use that to our advantage and make our backyards unappealing, sending them elsewhere.

Sprinkling the entrances to mole tunnels, which can be found underneath the little mounds of freshly dug earth, with strong smelling substances is a real deterrent, but they will have to be reapplied if it rains.The most effective methods use:

Some other ideas that seem to work well are to coat an old rag in roofing tar, and place it in their tunnels – moles hate roofing tar. Who knew? While a mixture of castor oil and washing detergent diluted in water and poured into and around the tunnel entrances has the same effect.

A nice way of getting rid of moles is to plant daffodils, marigolds and alliums, as moles steer away from these plants if growing around the perimeter of your property.

Many people swear by ultrasonic vibration as moles find the vibrations disorientating. I’ve found that the XMStore Solar Powered Mole Repellent works really well at driving the furry critters out of my backyard, and since installing this system, I have been mole free. 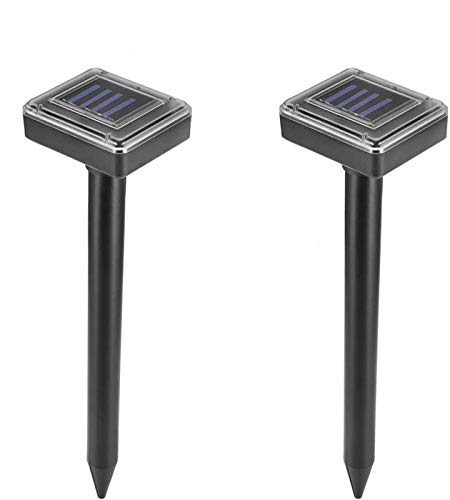 In the unlikely event that none of these methods get rid of your mole, and you feel it really has to go, call a pest control company, who can humanely solve the problem.